We had recorded this show directly following the last Fox Pub show last month…  We had wanted to make sure we put out the last one lickity-split, in order to get the word out on the North-side Beerfest.  (Which we heard was awesome!)

This show, we get a little more into the doing’s and business of the Fox Pub, and get Matt to defect questions left and right.  That means we are doing our jobs right?  We had a great time, and Rob (Central Illinois’ version of Bonus Beer Bob) makes sure we have some comedic interruptions.  Chad shows up with the bonus beer though… So, we may need to rethink the titles of these “extras”.

I have to admit… This show had me smiling all the way through on production.  I hope you enjoy it as much I did!  G

Thanks to Matt and all the gang for letting us hang out and have a great time talking about beers at an awesome local venue!  Make your way there if you get the chance!  And don’t let them make the ducky noise!!! 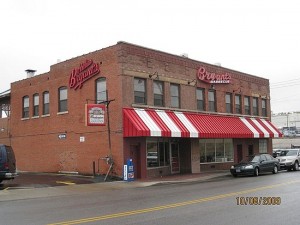 Holy Smokes!  (Bad BBQ pun?)  Sometimes you stumble on something so special that you start to wonder how many other places you are missing out on!  Unique family owned or started eateries probably number in the millions across the US.

Perfect example.  Arthur Bryant’s BBQ in Kansas City Mo.  (Stolen photo above, ignore the date) The place has been around for 50 years…  Probably served a million people…  And I would have had no clue it existed if it had not been for a review on the Urban Spoon iPhone application.

Lets back up.  On our family trip back from Denver, we had planned on stopping and spending the night in Kansas City Mo.  We knew we wanted some Kansas City BBQ…  And I also wanted to hit a brewpub if possible.   Well, we are talking about Kansas here…  Part of the craft beer wasteland that is the Midwest!  After using the “Find Craft Beer” app… The brewery and brewpub selection was not much to speak of.  Boulevard, the biggest brewery in the area does not serve food.  Beer themed dining was looking like a washout.

It was decided that BBQ would be the better direction to lean, and if the establishment had decent beer…  That would be a plus!

Let me be REAL upfront here and say that we were a little worried about the neighborhood surrounding the restaurant.  The “HUD” was literally down a block…  They had a security guard walking the parking lot…  And I could see the boyz cruising the neighborhood with rims twice the size as those on my Swaggerwagon.

Margaret and I said, “What the Hell”…  If the kids are gonna get some culture… It might as well be KC just as it might be Rome!  Get out and try out the local flavor!  So, we got of the car… And I checked twice to make sure it was locked!

To be fair… There was no threat to my life here.  It was a Monday afternoon… The place was full…  And it was smelling like Heaven on Earth outside.  How can crime be inflicted in the presences of smells like this?

We got in cue for the order process a few seconds after walking through the door…  I determined very quickly that we better have our crap together before they go to us at the order window.

“Watta ya have” was being yelled at every customer who walked up the “chefs” at the order window.  Then it was: Bing Bang Boom…   Dinner served on a plate and at the cashier within a minute.

Oh man!  This menu looks so simple… But complicated! 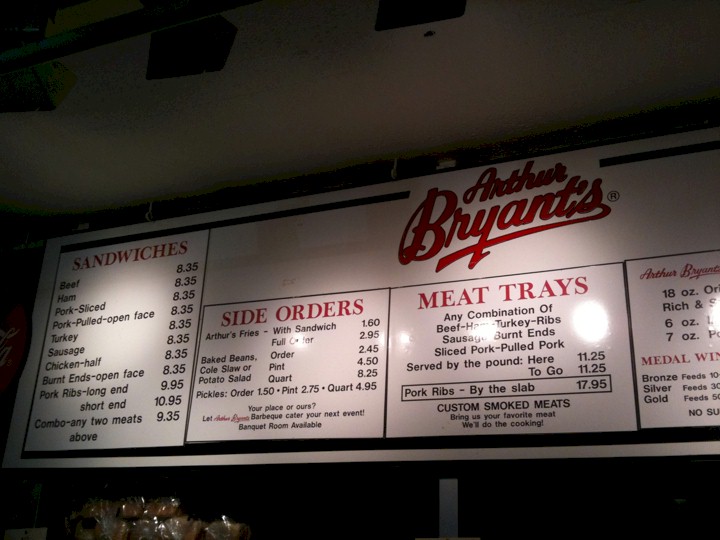 Crap!!!  Fortunately they were talking to the folks in front of me.  But to make matters worse…  Evern plate that is walking past me looks nothing like what I am expecting on the menu.  WHAT TO GET!!!!

Margaret ordered first…  Some kind of pulled pork open face sandwich.  That’s pretty safe…  No biggie.  This kids ordered a ham sandwich… Not knowing it might the most awesome smoked ham they might have in their entire life… Not just their short life till now!  I got crazy and ordered the Pork Ribs… Short End.  Not even knowing what the difference was!  “Watta ya have” was in my face now…. And I was in near panic mode!  “Short Ribs”, I blurted out.

Dammit… I hope I did OK.  Did I look like a moron noob???  I’m sure to them I did.  As a saving grace.   At the end of the order line they had 2 beers on draft.  1 was Miller lite, the other was Boulevard Pale Ale.  Ahhhhh…. Something I didn’t look like a moron ordering!  “I’ll take a Pale Ale” I proclaimed with confidence.

The food was amazing.  My ribs were perfectly cooked.  As I mentioned above, the kids had amazing smoked ham on a sandwich split between the two of them.  Margaret’s pulled pork was tasty… And a generous portion.  I drenched a corner of my plate in some of the Arthur Bryant KC sauce.  It was dry and bitter.  Nothing sugary or sweet about it.  I rolled every rib with a dose of the Bryant sauce.   After polishing off those ribs, some extra greasy fries and that pale ale… I was done!  I saw that everyone else was feeling the same way.  “Blowed out!”

Totally satisfied!  Totally worth the stop!  If you are in KC… You would be insane not to stop and getta a dose of “Watta ya have?”