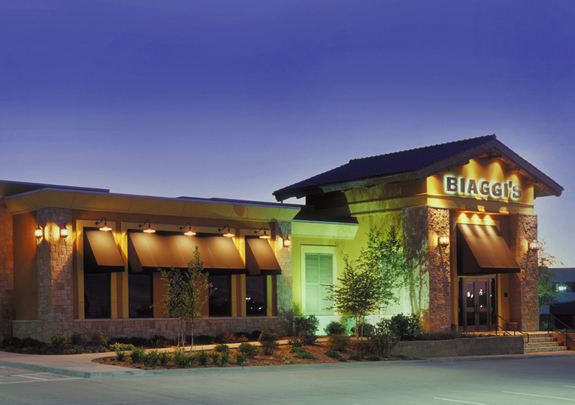 A.B. and I just got back from having a pretty killer meal at Biaggi’s restaurant in Bloomington. I find the place fascinating to some degree. It’s an Italian chain that actually started in Bloomington, which quite frankly doesn’t seem possible due to the general level of quality. This place is what Olive Garden commercials would have you believe that fetid bowl of lukewarm disappointment is supposed to be. Really, have you ever gone to the Olive Garden and not been left with a lingering sense of anxiety and sadness because you want to believe you had a good meal, but no matter how strong your desire to lie to yourself and agree with the marketing is you can’t overcome the plain fact that everything besides the salad and breadsticks sucked? No, you can’t, so let’s move on.

While it’s a chain, it’s a relatively upscale chain in atmosphere. The decorations seem to mainly consist of framed old maps and glazed ceramic folk art give the place a decent feel. There are nice looking hardwood floors, and a large fireplace in the middle of the room. The only issue I would have is that the place is louder than hell. After you’ve stuffed yourself into a state of compulsory walrus imitation there is a vague feeling of sensory overload. You also get the feeling you’re surrounded by the worst sort of yuppie douche bags, ex-jock businessmen, and their savage, pill popping, harpy wives. The niceness of the place seems to be the shining porch light for all those who have lifted themselves out of economic poverty, but are still living in a rotten ghetto of the soul populated with the bitterness of repressed individuality, TV’s tuned into Fox News, and fat old men in pastel polo shirts and khaki shorts that make you want to eat your eyeballs as an appetizer. The bar looks like a prime stalking ground if you’re looking for a lonely cougar to buy you some drinks though, so there’s a social plus. I may be wrong on that though and cannot test my theory due to my soon to be betrothed social status.

Our waitress was fantastic and was well versed in the ingredients and flavors of various options on the menu. You can usually tell when the wait staff is just blurting out whatever the chef told them to say at some kind of pre-shift meeting. She seemed to genuinely know what she was talking about and was very friendly, prompt, and took care of things quickly, even though it the place was pretty packed and bustling for a Wednesday night.

We started off with the Carpaccio. How can you not order a plate of raw meat when you have the option? Not to mention if you’re really hungry when you show up, they have no excuse for not getting it to you quickly. The buttery raw meat was awesome with capers, onions, arugula, and slices of Parmigianno Reggiano cheese. As good as this was, whenever I’m eating raw meat I get jealous of cats and other predatory animals. Think about it for a minute. Being humans, we get to enjoy a vast range of flavors because people are made to eat lots of things, but I bet that jack of all trades nature of our being takes away some of the pleasure experienced by animals of a more specialized nature. Predators fucking LIVE just to eat raw meat, and it’s basically all they taste. I bet it’s unbelievably good and that’s the reason the four legg-ed death machine (my cat) freaks out when he gets of whiff of freshly disarticulated life in the kitchen. That bastard.

I ordered a pork shank that had supposedly been roasting all day with white beans and A.B. ordered spicy pasta with mussels, calamari, and scallops. I couldn’t tell you what the actual names of them were now, other than they sounded excitingly authentic enough you could pretend this is what food in Italy might actually taste like for an hour if you’ve never been there. I can’t speak for her food but mine was fantastic. I don’t think my Italian great grandmother ever cooked anything remotely like it, but the hominess of it took me back to being in her kitchen at eight years old. The ugly carpet, home made pizzelli cookies, garlic under the beds to keep away vampires, old metal fans you risked losing your fingers in, pictures of long dead family members from the war looking stern, hateful, and very, very, dead, the fact that her house was an old hospital, and of course decades old cans of Old Milwaukee Light she would give me when I started getting unruly… Her house was great for the most part, but what the hell is it with old people and sherbet? What the shit? They always have that green and orange block of industrialized nightmares tucked away in the freezer for years, waiting for the day they can finally bust it out for that special occasion when the family is over. By the time that extra special day comes around though, it’s got an inch deep layer of freezer burn, and tastes like baking soda blended with cremated rats and fruit roll ups the smelly kid in class let melt in their lunch box. Everyone in the room hates it; everyone is well aware it makes you want to brush your teeth with lye and steel wool, but everyone just smiles and pretends it’s okay because you know if don’t play along grandma will lock herself in the bedroom and bawl about how she somehow failed as the family matriarch for the last 60 years and we should just leaver her to die. Ah, sweet Catholicism, you bring so many gifts of guilt in so many strange ways, how could I ever repay you?

I had two pretty good glasses of wine with dinner. The first was Gnarly Head Old Vine Zinfandel. I don’t have much in the way of wine description skills, so I’ll describe it as old saddle leather with Old Spice dark, if Old Spice had a “dark”. I mean that in the most complimentary of ways. After that I had some surprisingly flowery tasting Shiraz from Australia. They were both good but it was like going from having a conversation with the roughneck John Wayne of wines to a goth Liberace, smoking clove cigarettes, ready to play some Vampire:The Masquerade, demanding you call him Madame Ravensflight in public, and wearing a corset bought at the medieval fair. It was a little jarring and honestly was a pretty bad wine choice to go with the pork. I’m still not well versed in what booze goes with what food though that’s something I would like to rectify.

To end everything A.B. ordered some raspberry sorbet and vanilla bean ice cream. There is no way I could describe her reaction to it without being nauseatingly lewd. One of the younger floor managers stopped over just to watch her eat a few bites and smile before moving on. I guess it was satisfactory.

After all that the bill came to $65, which considering what we had wasn’t out of line. It’s not a superb dining experience overall, the atmosphere doesn’t go that far and while the food is pretty good it’s not over the top. If you’re in the mood for some Italian food though you could do far, far worse, especially here in the Midwest. Sometimes it seems that to the indigenous inhabitants here flavor is the devil’s work and if the ingredients didn’t come out of a cardboard box or giant can it will not be tolerated, because eating food with flavor and authenticity means being a “pussy”.

Anyway, I promise that after this I will write something about beer. Expect a review of the new Iron Maiden coming up in a week too.