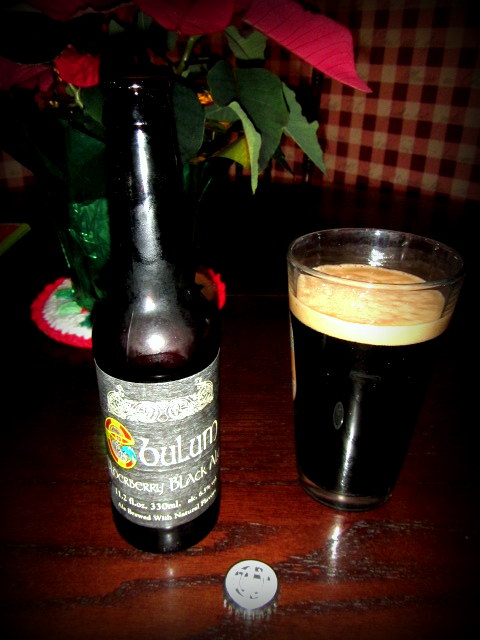 Before I get to the excuses… Let me spend a minute talking about a beer that deserves a bit of praise.

We always like to pick up those odd ball selections off the local bottle shop shelves.  We read the bottle label and make the decision to drink this solely on whatever vibe comes off it.  Its really an adult version of bobbing for apples and hoping you don’t pull out something rotten!

This beer tonight is no different.  Its a Scottish dark ale…  Made with Elderberries.  Supposedly its inspired by a recipe from 16th century texts.  (Who knew texting was big back then!)  We love the Scots and always rely on our knowledge of Braveheart for our Scottish history.  We suspect that this is the beer that fueled a failed revolution!

Actually…   The beer is pretty full flavored for what could have been a gimmick beer.  It has plenty of roasty stout flavors…  A better than average body.  Most import stouts are thin and watery.  This one holds it own pretty well.

If you are looking for a beer to pair with while bragging about your love of Highlander.  I would totally recommend this.  If it shows up on your beers of the world tour at the local beer joint.  DRINK IT!  Its gonna be better than 90% of the import selections found in those bars!

Groucho here.  Over the past few months we have been in general disarray.  I think we will save the details for the next show.  I have a show that I could release.  But I thought it sucked… So, it will probably never get released!  Maybe I will change my mind and cut out 90% just to see what comes out of it!?!?!

As for me, it looks like Studio A is on the move here in the next few months.  With that, we may finally have high speed Internet!!!  Finally, we can put this 1990’s Internet lifestyle behind us.

We need to get our beer drinking priorities lined up, get buzzed and start recording!

See you next year!