Q:What is best in life?

A: To crush your enemies, to see them driven before you, and to hear the lamentations of their women!

Q: Okay, but besides the obvious?

A: Not hard to say. Beer, metal, food, and culture.

Those last four pinnacles of human achievement are the impetus for starting this new blog project. While The Beer Report has always been Groucho’s creative baby that I just get to show up and drink at, I wanted to make something to tie all my interests together. So, I convinced Groucho to give me a blog space and invited him to contribute as well. Thanks for putting this together for me brother.

As for content, this is still the beer report after all, so you will see pictures and reviews of beers I’m drinking when we aren’t doing the show. If I’m going to be drinking and sitting in front of a computer I might as well share it everyone, right? I’ll try and keep the fancy beer language to a minimum. Rather than discuss the differences between Noble and Cascade Hops I’ll try and keep it metaphorical and entertaining.

I will be upping the metal ante though and writing album reviews. There won’t be any restrictions on the style but you can expect to see mostly underground metal highlighted. As well as seeing reviews on new albums I’m digging, expect to see some nostalgic reviews of classic albums, and reports of musical archaeology as I dig up rarities, or albums I just plain missed decades ago.

This space will also be getting hit with anything else of interest, be it food, museum trips, book reviews, mythological speculation, Lovecraftian evocations, philosophical self flagellation, and the discussion of T-Shirt culture ethics in underground music scenes. 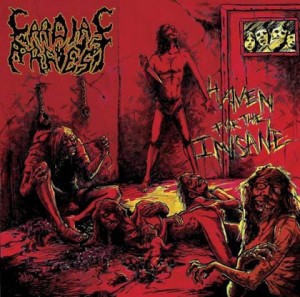 No use wasting time so let’s get right into it. The first album up for review is Cardiac Arrest – Haven For The Insane. The band has been around since 1997 but have only recently become prolific. This is their third full length since 2006. It’s their first record for Ibex Moon Records which is run by John McEntee of Incantation. If you’re fan of old school death metal at all it’s a label you should be checking out.

The first thing that leaps out at you is that the guys in Cardiac Arrest love early death metal and play it the way I think it’s supposed to be played. Lots of underground bands these days are all noodles, weak sauce, and no meatballs. There’s no need to worry about that with this album. Yes there’s speed, but not for the sake of speed, and they have no problem taking big, mid paced, bloody, chunking riffs and riding them when necessary.

I’ve listened through this a few times and have come to the conclusion that this is the Donovan McNabb of death metal albums. By that I mean that the record is mostly great but slightly aggravating at times. It’s not because the album isn’t good. It’s that it flirts with greatness but just doesn’t quite reach the pinnacle. This is no doubt a killer death metal record and I recommend any fan of death metal to check these guys out, especially if you grew up on or like material from the early 90’s. There are a few details that trip it up at times though. The production is tinny. Not completely thin but just enough that you know it could be a little more powerful. On the other hand, the production does a great job at capturing the energy and aggression of the band, and they have those qualities in spades. This thing rips. While the album is mostly packed with killer riffs, there are a few that fall flat, or a few transitions here or there that just seem a little wonky. There are plenty of other riffs that are fantastic on the record, and the fact that the rest is so good it makes the bad moments really stand out. Maybe shaving a couple of tracks off the record may have just honed it down to extra sharpness.

I know this review may sound a little conflicted, but overall I wholeheartedly recommend checking these guys out. The good far outweighs the bad and I am really nitpicking this one fairly hard. I’ll be checking their older material soon.