We did it!  We got people in the door (Lots of TBR People!) and had a blast on a weeknight in Pekin with craftbeer!  Snow is now being shoveled in Hell!

Here is the audio that Groucho took while wandering the crowd and chatting with some Pekin Main Street folks.

Listen as I shill DeStihl to some folks who want more!!! 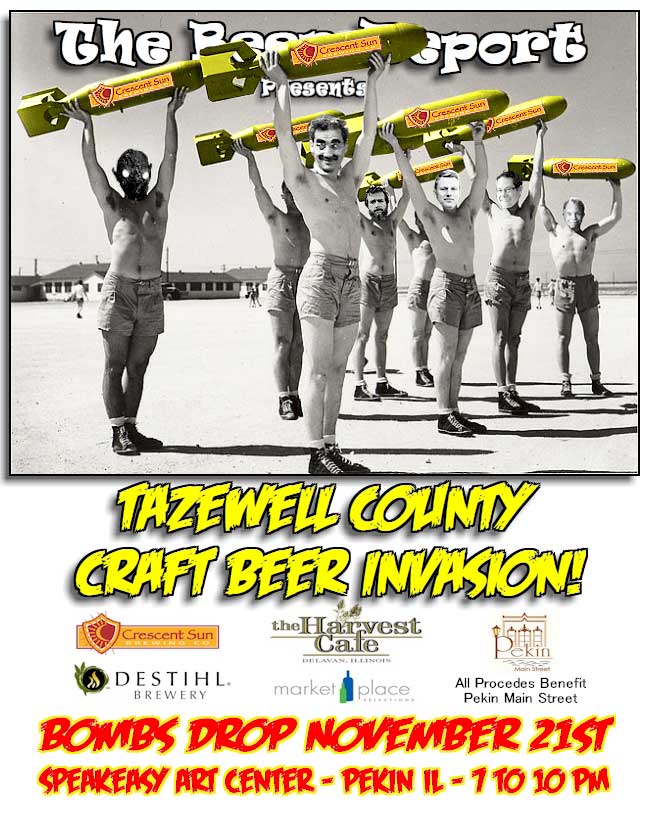 Taken from CHUD’s Facebook group and re-posted here… Because you know he doesn’t love you enough!  G

Link to the page:  https://www.facebook.com/bieristkrieg

Ah, it’s beautiful November again. This is by far my favorite month of the year. It’s that beautiful transition between Fall to Winter. Shadows creep low and long over the landscape. Temperatures finally start dipping into the 40’s and 30’s and with that for me at comes a rush of joy and breath of new energy. What’s great is that so many people hate this month with a passion. The whining and bitching about the weather starts growing and people start feeling generally moody and forlorn. To this I say YES!!! I don’t know if it’s some weird middle child sort of derangement, but when everyone else is having a shitty time of things, I generally feel better and more at peace. I’m like a weird superhero, drawing power, joy, and control from others negativity. Ooh your day sucks, why thank you, I’ll have another. Maybe it just makes it easier for me to avoid my own problems, but either way, it gets me feeling creative. I’ll save my freak outs for the summer months while the rest of you are giddy about something lame like the sun.

This time of year I want to be outdoors in the gray gloom and soaking up the damp smells of earth. Everything is just a tad phased out, visibility is low, and everything seems misty even when it’s not. It’s like the whole landscape takes on the quality of old vinyl records and analogue tape hiss. There’s just enough of a disconnect that you have to use your imagination to bridge a gap between you and the life in things, and you have to be a little bit more creatively engaged to experience everything around you.

The weather enhances one other thing too. Black Metal!! It just sounds better this time of year. That being said, I’m not quite ready to jump into full on black metal darkness as full time listening just as of yet. It’s a good time for some good ol’ pagan inspired black metal rather than the full on cold Satanic vibe. Bands like Drudkh, later Burzum, and Wolves in the Throne Room tend to dominate my listening. You can only go over those old classics so many times though. This is where Winterfylleth comes in. The name means October in old English, and I’m a year late coming to this record, a few years late in finding this band, but they’re a perfect addition to the seasons rotation.

They get compared a lot to Wolves in the Throne Room for their feel, and to Wodensthrone as they are fully inspired by their English landscape and history, but I don’t think that’s a totally fair comparison. Partially, but there’s also a bit of old Drudkh in there for good measure. They bridge the old and the new fairly well in their sound. The music on this one is a little more streamlined compared to the last two albums, with long flowing riffs that feel soft to the touch. The drumming generally sticks to mid paced blasting and rolling double bass but lends plenty of drive to the material. Touches of transcendent melody emerge from the throbbing hum of the guitars just enough to inspire the kind of feelings of longing and wonder that make you picture gray skies, hillsides covered in fading grass, and the muted out colors of the woods in late fall. Yeah, writing that makes me feel like there would be some black metal hipster holding a Starbucks, with a too thing beard, and a scarf nodding in agreement. That kind of makes me want to punch myself in the balls, but fuck it, there it is.

The production is pretty much perfect for this record to my ears. It’s very clear but feels very alive and not over processed. While the drumming may generally be simple as needed, you can hear all the subtle nuances to the cymbal hits very well. The guitars have a proper fallen leaves fuzz but never to the point of obscuring the content. The vocals have just the right amount of reverb and everything is mixed clearly.

If there’s one thing that could be leveled against the record is that the formula is pretty much the same for every song. For an album that just pushes past an hour in length, it has the possibility of making digesting the whole record in one sitting a tad much.

This record needs a beer that is classically English, slightly bitter, but not too dark. It needs something still with some gold, a thinner body, but with enough flavor you know it’s still hearty ale when you’re drinking it. Something you don’t really drink when it’s freezing cold, but something not a hot weather beer either. Fitting the bill for this is St. Peters Organic English Ale. A classic of the style, this is one to drink at room temperature to get the full experience out of it and perfect for a cool and overcast day. There’s just enough hops to let you know it’s there, but you have to engage this beer a bit or it will go down a little too easy. It’s definitely one to savor and enjoy over time, and one I think pairs perfectly with a record like this. 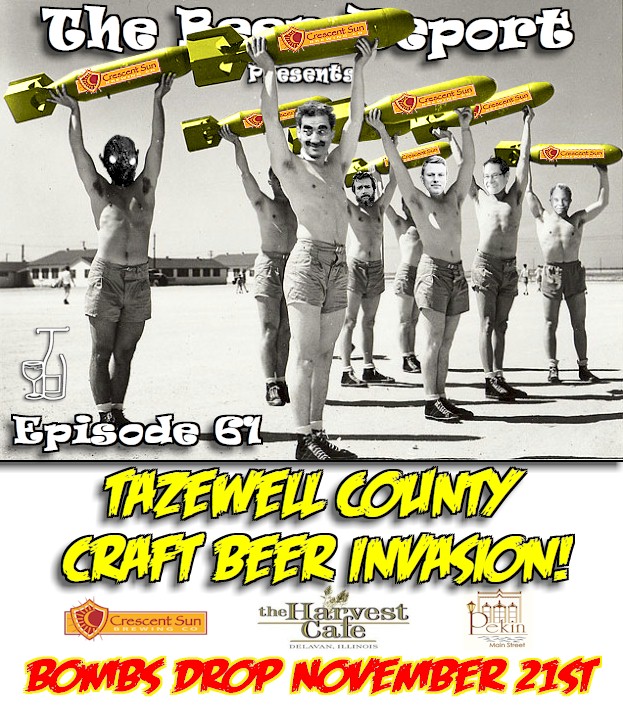 CHUD free show???  Groucho has to wing it as he hits Delavan to do a show about all the current beer doings that are coming up here in November.  Beer “Doings” in Tazewell county!!!  Lets make this be the start of a trend!!!!

Beers on the show provided by The Harvest Cafe.  Thank you for all you guys do.  Special thanks to Ashley for letting us invade her store to do the show at Hometown Wine and Spirits.