The last time I did a beer review… It was for a brewery in the vast wasteland of beer that is the central plains.  Well, after a drive through Canada this past week… I can honestly say that the folks in Missouri have it far better than you poor socialist Canadians!

Not to get off subject about this beer… But I want to digress and tell a little bit about what I saw.  Well, maybe more about what I DIDNT see!  Craft beer!

I was so impressed when we were heading out of Toronto to see a store called “The Beer Store”.  “Hey, this has got to be a place to check out!”  Sadly, it was like Little Caesars pizza takeout.  Tons of “Macro” brands labeled on a wall waiting to be pulled “Cold and Ready” for checkout.   There were a few Mead’s listed.  But with the company they were keeping on the “menu”…  I was suspicious of their relationships to the macros.

So, after scouting out a few more places.  I finally found an honest to goodness liquor store.  It was a chain, LCBO.  They were touting a new beer area all over the banners placed around the building.  This was a good sign!  Turns out that Canada has a big pilsner culture!  I am not sure if this is progress, or if its business as usual.  There were very few “craft” offerings in the beer section.  I did manage to find lots of Canadian cans and a few French canned beers.  (That was actually kind of exciting for me!)  Then, I found this beer posing as an import.

Now, if I were trying to brand myself as a local Ontario brewery… I probably would not call myself the Amsterdam Brewery… And I certainly would not have used Oranje Weisse Premium White for the name.   But then again, I’m American, and we just blast you in the face with branding and burn it into your brain.  That’s how we are!

This subtle approach almost led me to overlook this beer as some random European import.  They did have a nice little instruction sheet on the neck of the bottle reiterating instructions already on the bottle on how to roll the bottle and swirl the yeast.  This little tidbit on advertising was enough to have me pick up the bottle and see what was going on.   I figured, if these guys care enough to instruct their drinkers on how to enjoy the beer.  They may just care enough about the beer going in the bottle more than others.

The beer is solid.  It reminds me of my first experiences with European Whit beers in the past.  Which is a good thing.  It hits all the flavor notes I expected.  I have been searching my palette for the orange notes since I stared writing this.  I have to say its not as strong as I had hoped.  Too bad, that would have been cool if it was something that made this beer stand out versus those imports I referred to.  I followed the instructions about rolling the bottle before opening it and pouring.  But, I was not happy with this technique.  Since I am using my little 8oz IKEA taster glass, I had to fill it back up halfway trough the bottle.  On the second half I did the “Swirl” that I am accustomed too.  This presented me with a beer that was much foggier and maybe, just maybe, some more of that orange taste.

All in all…  A very enjoyable summer “vit”.  I don’t think this beer is available anywhere around me.  Is it in the states at all?  Cant say.  I am glad I bought 2 bottles.  I will enjoy this one the next time I am grilling out with some tuna steaks or some other fresh, light summer foods.

Back to what I saw in during my brief run through Canada.   Are Canadians searching for a beer like this?  Probably not.  So, you have to start with your niche groups and then somehow hope the masses “come around”.  I am still amazed by brewers who go on a limb and start up a new venture in inhospitable areas.  To me, starting a craft beer brewery in Canada has got to take some nuts.   I would love to know the statistics of market share and growth of Canadian Craft brewers vs the big boys.  In America, we constantly marvel and brag about the growth of Craft Beer.  After looking some things up, (yeah, we do that sometimes) I find that these guys have been making beer for 25 years.  So, they must know what they are doing! 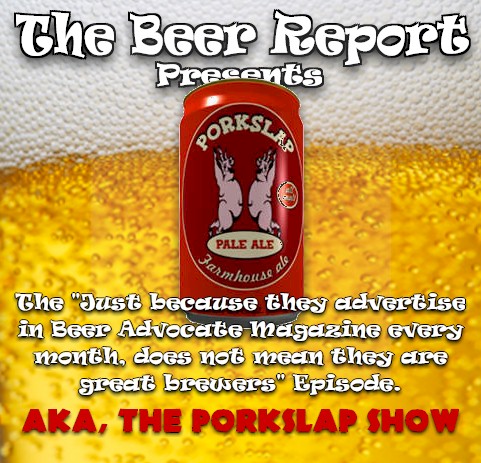 Beers on the show picked up on Groucho’s recent trip to Washington DC…  Purchases made even after being strongly advised against it by friend of the show, Bubby.

The Term “Big Brother Beer” has been stolen with little regard from The Good Beer Show.  www.goodbeershow.com.  All royalties from this show will be forwarded to his Swiss bank account once they are calculated.

Ok…  As hard as it may be to do, sometimes you have to put the “beer dork” badge away. Try and drink and think about a beer like one of the “locals” that might be enjoying it for the first time…

That’s what I have here tonight with the Crown Valley Work Truck Wheat Beer.   Its fizzy, yellow, zero headed and lightly tasty.  All in all an average craft beer at best…  But you have to consider where this beer comes from.

Mizzou.  Part of the barren wasteland of beer that is Midwest.  Not the good parts of the Midwest…  You know the places; Michigan, Minnesota or even Indiana.  Nope, Missouri is part of that western Midwest that stretches to the steps of the Rockies before beer starts getting decent again.  Its not the fault of brewers.  Its just that the appreciation for the Craft Beer Revolution has not been embraced fully by these folks.

So, you have to step into the brewers shoes before you just rip a beer for being average.  This beer sets out to grab those of the uninitiated and make converts.  That’s a tough gig.  Your beer has to be reasonably priced and cannot rip the taste-buds out of a Bud/Miller/Coors drinker.  You don’t want to scare them away, you want to lure them back to try more.  When you put it that way…  This beer succeeds.

Its has that bit of wheaty-fruity thing you note in a classic Hefe…  And that’s about it.  Its still a little fizzy and boring.  But, its certainly drinkable.   And, I would hazard to guess that its probably VERY drinkable on a hot day.

I realize the beer will come off as underwhelming to you beer geeks.  But thats OK.  Someday, someone who started on a beer like this will grow to your stature.   And the cycle will continue!