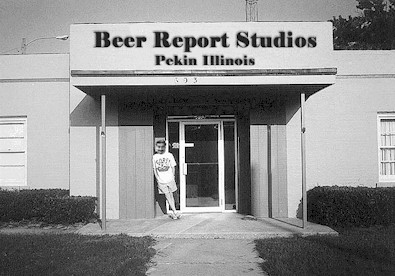 Exciting news for Pekin and the surrounding communities of Tazewell County IL! Beer Report Studios in lovely Pekin Illinois are now fully renovated and have been christened with the production of one of the finest alcohol review shows in downstate Illinois. With the re-opening of this facility, Beer Report Studios is pleased to announce the acquisition of star beer connoisseurs… Groucho Markks and his brother, CHUD Markks.

Groucho and CHUD have both used most of their collective spare time traveling this fine country trying out local and not-so-local beer. They are known for their vocal opinions of all things, but especially beer. The Markks brothers are also known to smaller audiences for a rapier wit and a bar banter rivaled by none. Look for new beer reports posted here as Podcasts. Commercial free and never edited for taste! Intended for mature audiences!

Brothers in Beer! The Beer Report is a beer review podcast with commentary for the “Joe Craft Beer Six-pack” crowd! If you are looking for another NPR style beer tasting show… You are probably going to be disappointed. Who are we kidding? There are about 20 podcasts that sniff, swallow, twaddle and judge beer like fine wine. We are not one of those!

Most everyone is aware of the past, if not, here are some highlights: A CHUD rant about Podcasts on Episode 11 pissed off most podcasters! We made fun of some people over at Winging It (Before Evo was canned) and that pissed off the geek nation… And, as of 40 episodes or so, most Belgium-ites, Rate Beer Fans, Pierre Cellis apologists, Canadians, and Vampires really hate our show.

If you are not in that group… Don’t worry… We’ll probably piss on something you like sooner or later! 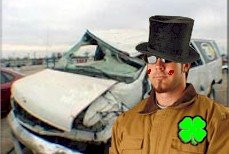 had car problems! We make up for lost time and submit our first 1 hour show. Its long and filled with conversation about beer! Imagine that!

Beers on the show, Old Jock, The 2005 Brewmaster from Anheuser Busch, Arrogant Bastard by the Stone Brewery, Old Engine Oil by Harvestoon Brewery.

Old Jock is from Kurt & Estry, The Brewmaster is from Irish, Arrogant Bastard is from the boys at Clarkehead, and Engine Oil was purchased at Friar Tucks in Peoria.

Another 3rd wheel show… Someday I will have the equipment to handle these situations.

Give a warm welcome to the Homeless Hoopmaster! After begging for weeks for the chance to get behind a microphone on the Beer Report, Groucho finally succumbs to the athletic inebriate. Unlike Eggs, this 3rd party show does not include many compliments or ego strokes.

If Homeless sounds loud as hell… He is!

The last 20 minutes have a stellar turn of events that are seldom ever caught on tape. A guy getting busted by his Wife and kids after getting wrecked! For the record… HH probably downed 6 shots of the Seahorse during our show… CHUD had ZERO, and Groucho had 1. We are soulless bastards!

Beer on the show are from Friar Tucks in Peoria and Bloomington. The Clarkehead is a home-brew, still the best home-brew!

Check out the thebeerreport.com. Also feel free to sign in to the “Confrontation Board“.